November and the first few weeks of December have been tough times for all covered bonds in the European market since they have been priced at a discount compared to government bonds. This pattern has also been evident in the case of Danish Mortgage Bonds where the weakening of prices came unexpected because the supply turned out lower than expected thus far.

We are now looking towards a high end-of-year issuance of Danish Mortgage Bonds. Mortgage bonds worth around 25 billion DKK are up for sale at the end of December, which provides us with a rather nice opportunity to buy at a very attractive level.

The price spread between a 10-year government bond 0.5% DGB 2027 and a 30 year Mortgage Bond 2% Nykredit 2050 with a similar duration (interest rate risk) is at the highest level on record - consequently the mortgage bond is as cheap as it has ever been compared to the government bond (see figure below).

In 2019, we expect the supply to be quite low and this - combined with buy-backs of Danish mortgage bonds by the Danish Central Bank in the level of 15-25 billion DKK - heralds a well-supported mortgage bond segment in 2019.

Worth noting is that the picture becomes even clearer when we compare with the equivalent German government bonds as shown below, with the 2%2050 at a historic cheap level. 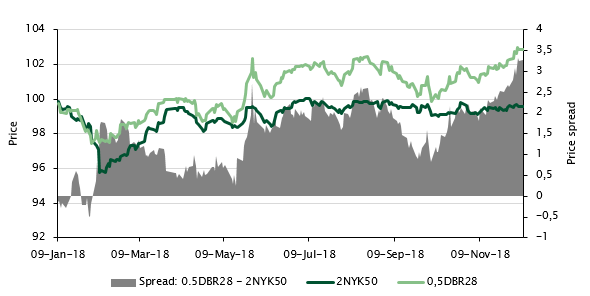