Sell in May and go away? – Equities Low Volatility demonstrates unrelenting strong performance

We have often stated that investors in the Equities Low Volatility strategy should expect strong protection of wealth in periods with turbulence and declining equity markets. We are therefore very pleased that the strategy yet again in May demonstrated its ability to preserve wealth in a struggling equity market with an active return of more than 4 percentage point. Since inception in December 2013, the strategy has realized a total return of more than 90%, corresponding to an excess return of approximately 20 percentage points compared to the global equity market.

Sudden shifts in sentiment driven by renewed trade tensions
Following an frankly quite impressive increase in the global equity market in the first four months of the year, the old adage “sell in May and go away” became relevant. The change in sentiment was driven by renewed trade tensions between the US and China pushing the global equity market lower by 4.75%. It is thus satisfying that the Equities Low Volatility strategy realized a return of -0.44% in May, equivalent to an active return of 4.31 percentage point. This is the highest active return realized in a single month since inception five years ago. More than half the equities in the strategy achieved a positive absolute return in May, with the Japanese telecommunication services company Nippon Telegraph & Telephone on top with a return of more than 9%. The strong result in May means that the strategy has realized a total return of 14.03% year to date, corresponding to an excess return of 1.32 percentage point compared to the global equity market. 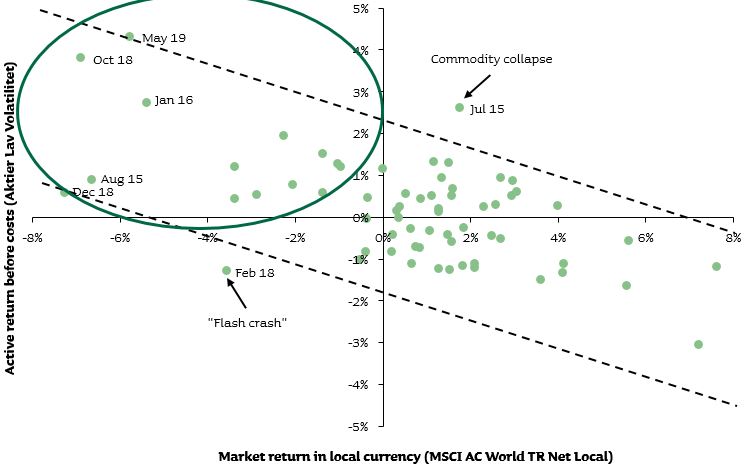 Note: Based on the fund “Jyske Invest Aktier Lav Volatilitet” for the period January, 2014 to May, 2019 and before costs
Source: Jyske Capital